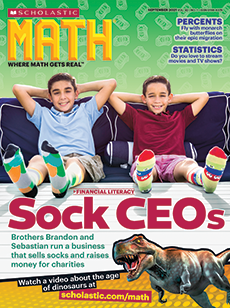 Dwarf giraffes’ necks are about the same length as those of their full-sized counterparts. But their legs are much shorter!

Giraffes typically tower above the trees of Africa, standing up to 16 feet tall. But while conducting research in Uganda in 2015, conservation biologist Michael Brown saw a giraffe unlike any he’d seen before: It looked like a horse with a giraffe’s neck, and it was only 9.5 feet tall!

Brown had spotted a dwarf giraffe. Dwarfism is a genetic condition that causes animals to be unusually short or small in size. It’s seen in humans, dogs, cows, and more. Only one other dwarf giraffe, found in Namibia, has been documented. Brown hopes the dwarf giraffe will help bring attention to giraffe conservation in general. “The more people know about giraffes,” he says, “the more likely they are to appreciate these animals.”

An average giraffe’s neck is 38% of its height. The Ugandan dwarf giraffe is 9.5 feet tall, and its neck is 4.8 feet long. What percent of its height is its neck, rounded to the nearest percent? Record your work and answer on our Numbers in the News answer sheet.