The World of Esports

Around the world, fans pack into massive arenas to see their favorite teams battle for victory. But these players aren’t hitting home runs or scoring touchdowns—they’re sitting at computers, controlling video game characters!

Esports have soared in popularity since the early 2000s. But the first major video game competition took place in 1980. More than 10,000 people played in a Space Invaders Tournament. Rebecca Heineman, a 17-year-old student from California, won. She became the first national video game tournament champion.

Then tournaments for games like Pac-Man and Donkey Kong popped up in arcades across the U.S. But modern esports took off in the late 1990s with online  tournaments. The internet allowed players from around the world to compete against each other from their homes instead of at in-person events.

Today, some schools have teams for esports! Students play games like Overwatch and League of Legends. Unlike traditional sports teams, anyone regardless of gender can join the team. Players test strategies, train with different characters, and run practice games to prepare for competitions. “Players are not just video game players. They’re athletes,” says Amy Whitlock, a teacher and esports coach in Oswego, Illinois. 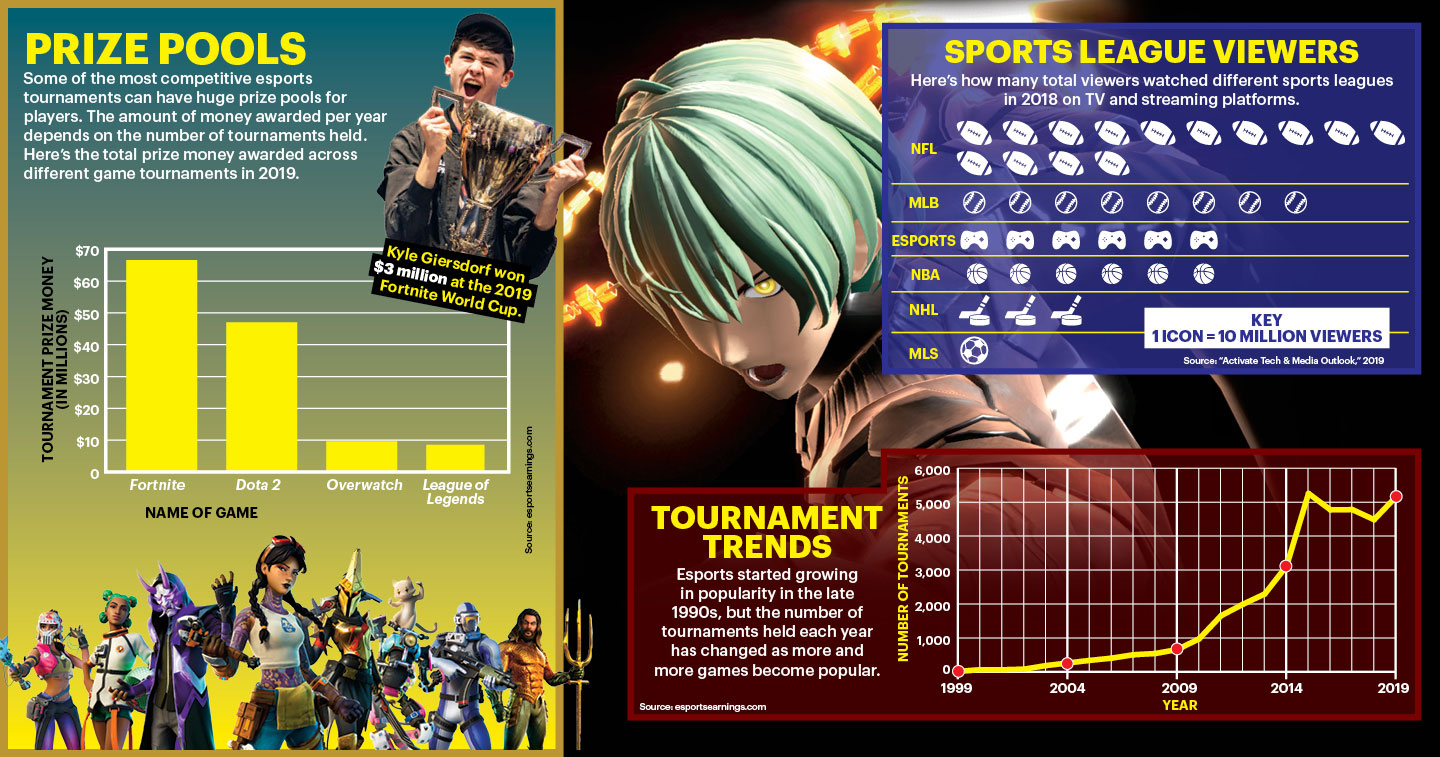 About how much was the total prize pool for Overwatch in 2019?

About how many esports tournaments were there in 2014?

In which year did the number of esports tournaments first reach 1,000?

About how many more people watched MLB games than esports leagues in 2018?

About how much greater was the total prize pool for Fortnite than for League of Legends in 2019?

Between which two years did the number of esports tournaments increase the most?

What combination of league viewership would equal the viewers that the NFL had in 2019?

The International makes up 73% of Dota 2’s total 2019 prize pool. About how much is awarded in that tournament?

What was the approximate percent increase in esports tournaments from 2009 to 2019, rounded to the nearest percent?

Poll your class on which video games they like best. (Visit scholastic.com/math for a poll template.) Then make a bar graph of the results.

●      Turn the data from the pictograph “Sport League Viewers” on page 15 into a bar graph. Use this Bar Graph Template.

●      Make a Venn diagram to compare and contrast sports and video games. In what ways are they similar? How are they different? Use this Similarities and Differences template.

●      Play the game Game Maker to practice computer programming and design your own game!