The Board Game Boom

Most Saturday nights, eighth grader Holden Fraser and his friends meet in his basement in Greenwich, Connecticut, to embark on an adventure. They prepare their characters, which include elves, wizards, dwarfs, and rogues. But instead of picking up video game controllers, Holden rolls seven colorful, multiple-sided dice to play the game Dungeons and Dragons, or D&D for short.

The adventure role-playing game was first published in 1974. Since then, tabletop games, which include D&D and all board games—from classics like Clue to modern ones like Settlers of Catan—have soared in popularity. D&D has also been featured in popular media, such as the Netflix show Stranger Things. That’s how Holden learned about the game two years ago.

D&D is just one of many tabletop games that people have been playing for thousands of years. Senet, one of the oldest known board games, was played in Egypt more than 5,000 years ago! Classic games like Monopoly debuted in the 1930s. But in the past 20 years tabletop games have exploded in popularity, with newer titles like Ticket to Ride selling millions of copies since it first went on sale in 2004.

Holden loves that tabletop games like D&D are social, but don’t require using any technology. “The story doesn’t move forward without the players,” Holden says. “It’s great to see all my friends get really into the world I’ve created.” 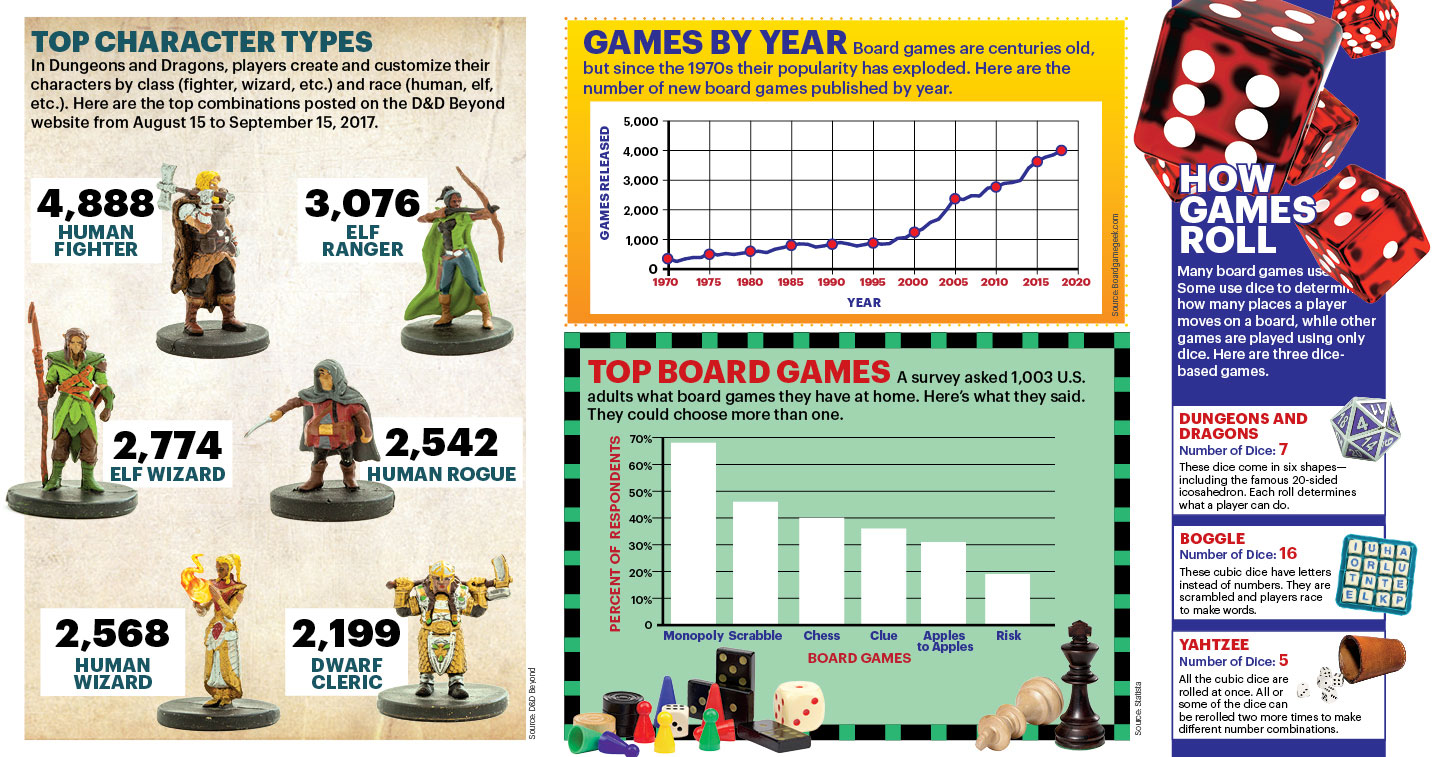 About what percent of adults polled say they have the game Clue at home?

Which D&D character in the infographic is the second-most popular?

About how many board games were published in 1985?

Which age group needs 8 hours of sleep at minimum?

According to the 2018 survey, about how many U.S. adults have the game Risk at home?

How many people registered wizard-class characters as one of the top-6 categories on the D&D Beyond website?

The sides of D&D’s 20-sided die are numbered 1 through 20. What is the probability of rolling a multiple of 3?

Which year had about 4 times as many games published as were published in 1975?

How many more people surveyed had Monopoly in their homes than Clue?

Poll your class on their favorite board game. Customize your own poll using the Google form below. Tally the data. Then create a bar graph on a separate sheet of paper to see the results.