When she was a kid growing up, none of the books Ellen Oh read had characters that looked like her. But when she was 19, she read The Joy Luck Club. Although Oh is Korean American, not Chinese like the book’s characters, she felt represented by them. “That book made me feel seen for the first time in my life,” Oh says.

Today, only 7 percent of children’s and young adult books published feature Asian characters. Some of those books are by Oh. She became a writer to create books about people who looked like her and her children.

Oh was also a member of the team of writers, illustrators, and publishers that created We Need Diverse Books (WNDB). It started as a Twitter hashtag that was widely used by readers and writers. The organization supports stories about ethnic, cultural, and religious minorities, people of different sexual orientations and gender identities, and people with disabilities written by authors who share those backgrounds.

“If you aren’t represented in literature and media of your own country, it makes you feel forever foreign,” says Oh. “Representation is important to show marginalized kids that they really do belong. Representation helps all other kids know that too.” 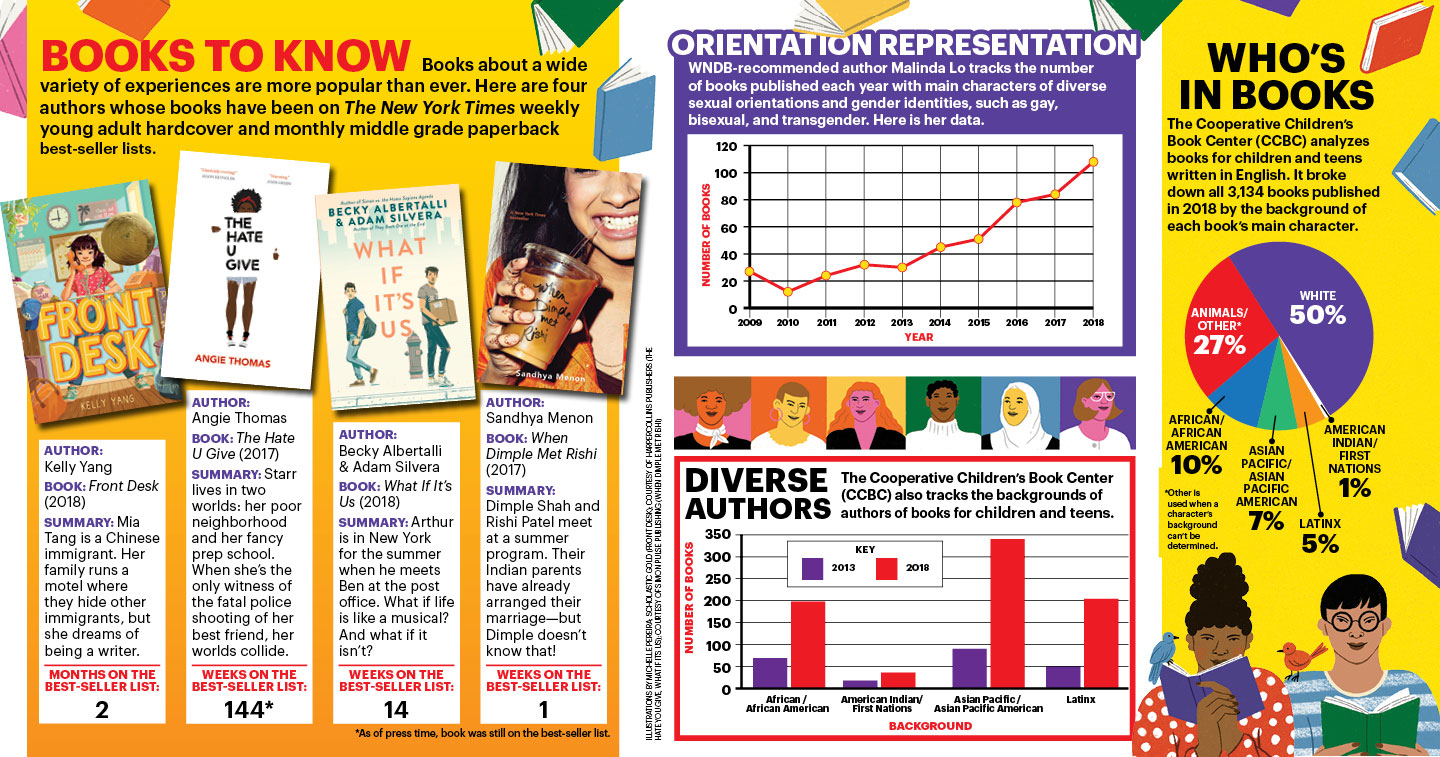 Illustrations by Michelle Pereira; Scholastic Gold (Front Desk); Courtesy of HarperCollins Publishers (The Hate You Give, What If It’s Us); Courtesy of Simon Pulse Publishing (When Dimple Met Rishi)

Which category of main character made up 50% of books published in 2018?

Which year first had about 80 books featuring main characters with diverse sexual orientations?

For how many days was The Hate U Give on the best-seller list?

About how many books did Latinx and African/African American authors publish in 2013 combined?

About how many books published in 2018 had a Latinx or American Indian/First Nations main character?

About how many more  Asian Pacific/Asian Pacific American authors published  books for kids and teens in 2018 than in 2013?

What’s the ratio of weeks The Hate U Give was on the best-seller list to What If It’s Us, in simplest form?

What was the percent change in books featuring main characters with diverse sexual orientations between 2009 and 2018?

Poll your class on their favorite winter sport. Customize your own poll using the Google form below. Then create a circle graph based on your results.