Toast a marshmallow over a campfire until it’s golden and gooey. Add a piece of chocolate and sandwich it all between two graham crackers. You just made a s’more! You can thank a Girl Scout for the camping treat. A recipe for “somemore” (which was later shortened to s’more) first appeared in the May 1925 issue of Girl Scout Leader magazine.

The popularity of s’mores is just one of the many ways that the group has influenced society. Half of the adult women in the U.S. were once Girl Scouts. They include senators and celebrities like Serena Williams.

The girls leadership organization was founded in Savannah, Georgia, in 1912 by Juliette Gordon “Daisy” Low. Entry-level scouts are called Daisies in her honor. Five years later, troops began selling their now-famous treats. A troop in Oklahoma sold homemade cookies as a way to raise money to send holiday care packages to soldiers in World War I.

The idea caught on, and in 1936 the Girl Scouts began licensing commercially made cookies to sell nationwide. Last year, on the 100th anniversary of the first sale, the Girl Scouts introduced s’mores-flavored cookies called Girl Scouts S’mores.

Girl Scouts sell about 200 million boxes of cookies and earn almost $800 million each year. Their profits help pay for trips and activities, such as camping, and for service projects in their communities. The program also gives participants valuable experience running a business, setting goals, and handling money.

Girl Scouts are about more than sweets and treats. Check out these graphs to learn more. 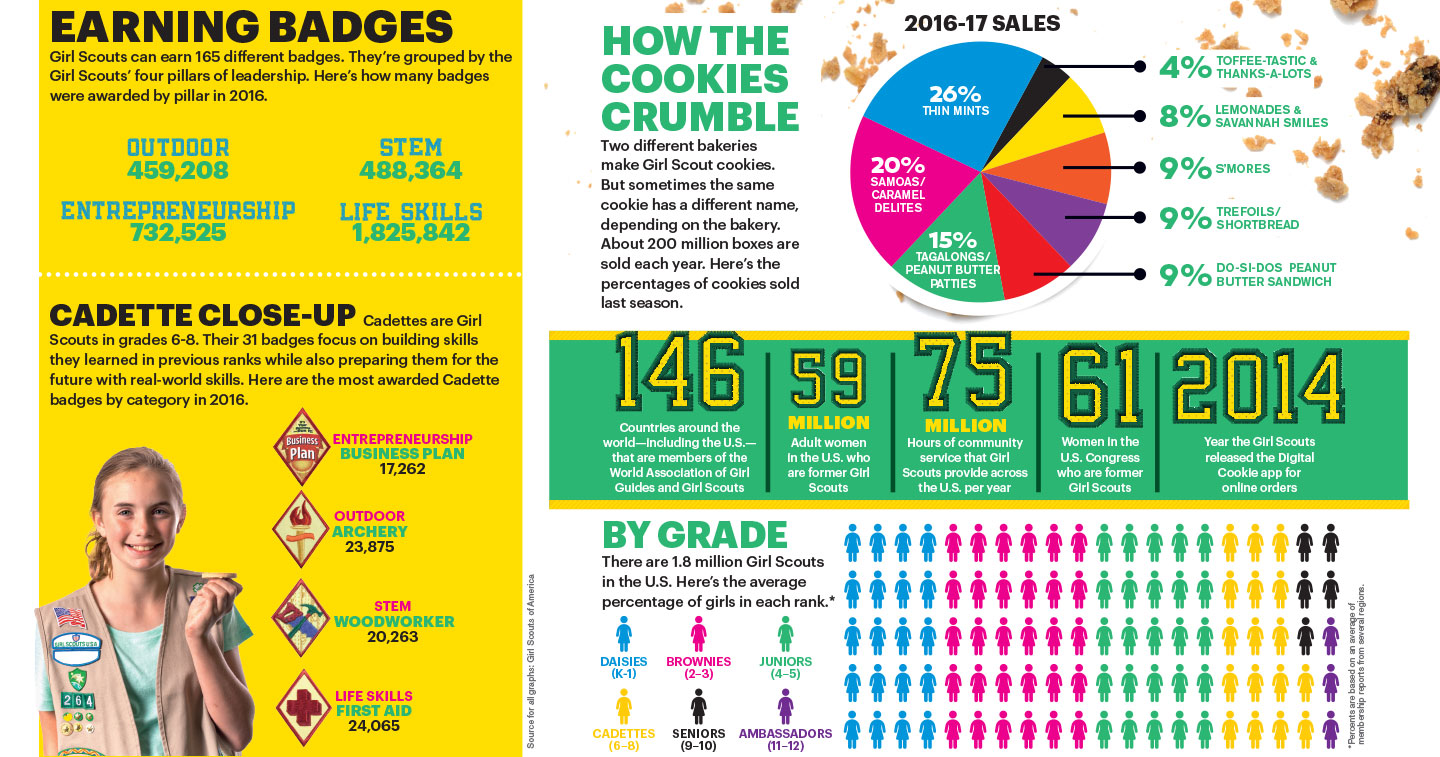 Which Cadette badge is the most-awarded badge of all the categories?

About how many Girl Scouts are currently part of the Cadette rank?

How many total badges were awarded in 2016 across all four pillars?

What percent of cookies sold in 2016-17 had peanut butter as a main ingredient?

Which two ranks make up 50% of Girl Scouts?

A) Brownies and Juniors

B) Daisies and Brownies

What is the difference between the number of Girl Scouts in the largest and the smallest rank?

About what percent of total outdoor badges awarded in 2016 were for archery?

On average, how many hours of community service does a single Girl Scout do each year?

A box of Thin Mints costs $4. About how much money is made from selling Thin Mints in a typical year?