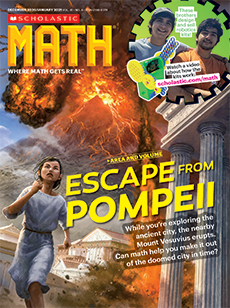 THEY HIDE: A veined octopus hides in a coconut shell.

Octopuses are crafty creatures that have mastered the art of deception

Off the coast of Indonesia, a mimic octopus lurks in warm, shallow water. It’s hard to spot the brown creature as it haunts the murky and muddy seafloor, easily blending into the background as it sneaks up on its next meal.

But that’s far from the octopus’s only trick. It changes shape and color in a flash to scare off predators. It can morph into what appear to be the venomous spines of a lion fish, or turn black and white to resemble a dangerous sea snake. Predators like crabs scuttle away in fear. Scuba divers have reported sightings of mimic octopuses masquerading as jellyfish, shrimp, crabs, seahorses, and stingrays.

The mimic octopus is just one of 300 octopus species swimming in the world’s oceans. And it’s not the only species with clever ways to camouflage itself. Most octopuses can change color, while others find sneaky hideaways in the tiniest nooks—in a coral reef or even coconut shells.

October 8 is World Octopus Day, in honor of these amazing animals. “People find connections with octopuses. They look into their big eyes and feel they have something in common,” says Christine Huffard, a biologist at the Monterey Bay Aquarium Research Institute in California.

Octopuses have eight arms lined with suckers that can taste and feel their environment. To match their surroundings, most octopuses can change the color and texture of their skin. Their skin is packed with cells called chromatophores, which contain colorful pigments. “They’re like little water balloons with different color paint that can expand and contract,” says Huffard. “If you zoom in on octopus skin, you can see little dots of color.” This allows octopuses to quickly change their skin to resemble plants and animals.

Some octopuses also copy the movement of other organisms, making them almost impossible to detect. “When mimicking algae, [an octopus species called] Abdopus aculeatus moves its body to look like it’s drifting in a current, even if the water is completely still,” says Huffard. “The octopus can also make itself long and brown to look like a piece of dead sea grass.”

Octopuses are colorblind, making their talent for disguise even more astounding. And they’re able to change color quickly because they do it without thinking. “It’s automatic,” says Huffard. “It’s not like the octopus needs to think ‘Look like this rock!”

THEY CHANGE COLOR: Watch a video (above) of a Cyane's cotopus changing colors.

Some octopuses are less than an inch long. Others are massive. The giant Pacific octopus can have an armspan of 30 feet and weigh a whopping 600 pounds. But no matter the size, all octopuses are very good at squeezing into tight spaces. That’s because they don’t have any bones. The only hard structure in their body is their beak, which they use to eat. Even large octopuses can fit through an opening the size of a quarter.

THEY MIMIC: A mimic octopus shape-shifts to imitate different creatures and hide from predators.

One such escape took place at the National Aquarium of New Zealand earlier this year. A soccer-ball-sized octopus named Inky busted out of his tank at night. His tracks suggest he crawled eight feet across the floor and dropped down a 164-foot drain pipe, which released him into the ocean. He hasn’t been seen since.

Octopuses have been known to open jars and escape from tiny holes in boats too. As for the octopuses that are still on view in the world’s aquariums, people are captivated by them. At the Seattle Aquarium in Washington state, biologist Joel Hollander gives octopuses enrichment toys, including a Mr. Potato Head toy stuffed with their favorite foods like crabs, clams, or fish. “Everyone watches while the octopus removes all of Mr. Potato Head’s limbs and devours the snack inside,” says Hollander. “That’s always a big hit.”

Scientists studying octopuses collect different types of data. To make sense of all those numbers, they turn to graphs. These tools allow researchers to display their data so it’s easier to interpret. There are many types of graphs to choose from. How do you know which graph is the best one to display a particular set of data?

The charts below show different data sets about octopuses. Use the charts to answer the questions that follow.

From 2012–14 the Monterey Bay Aquarium in California was home to a giant Pacific octopus named Cupcake. Her keepers at the aquarium regularly recorded her weight as she grew.

Octopuses are cephalopods, a class of soft-bodied marine animals. Scientists are always discovering new species, but these are the numbers documented so far.

Which data set is best displayed as a line graph? Why did you choose it?

A. Which is the only data set that can be displayed as a circle graph? Why?

B. Can that data set also be displayed as a bar graph or a line graph? Why or why not?

A. Graph the data in the chart that shows the changing weight of Cupcake the giant Pacific octopus on a separate sheet of paper.

B. Between which dates did Cupcake giant the most weight? How can you easily tell this from the graph that you made in part A?

A. Which data set can be displayed only as a bar graph?

B. Which bar would be the smallest?

Some scientists have measured the sizes of different octopuses’ beaks. They want to compare the size of the beaks to the size of the animals’ bodies. Which type of graph would be best to display this data? Explain your answer.

A. If scientists were to announce the discovery of 200 new species of octopus, which chart would that affect?

B. How would that change a graph based on that chart?

Imagine you’re a biologist studying octopuses. What type of data would you collect? Which graph would you use to display it? Write your answer on a separate sheet of paper.